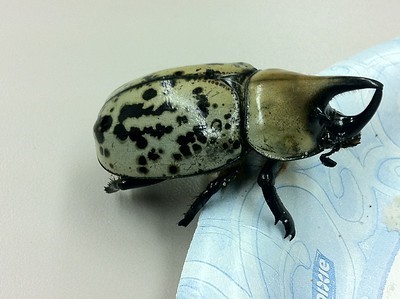 The eastern hercules beetle is one of the largest insects in the United States. The males can reach a length of 7 inches. Males have large horns which are usually about 1/3 of the body length. On some, the horns are longer than the rest of the body. Males use the horns to fight with other males as they compete for mating. The coloraton of the beetles is variable, but females are typically brownish black and males typically have black heads and black, brown or green bodies. There are several subspecies some of which are colored differently. Many have dark colored spots on the elytra.

The eastern hercules beetle, Dynastes tityus, can be found in the eastern half of the U.S. It has been recorded as far north as Illinois and New York state. These large beetles can be found across the southern U.S. from Florida to Texas. The western hercules beetle, Dynastes granti, is found in Arizona and Utah and Dynastes hyllus is found in Mexico, as far north as the state of Tamaulipas.

The larvae are large, white, C-shaped grubs. The larvae feed on rotten material (logs, stumps, dead leaves and rotten fruit). They produce large rectangular fecal pellets about .4 inches long. The larvae pupate in late summer. Adults emerge from the pupal stage, but stay underground during the winter. They emerge in the summer and live above ground for 3-6 months. They have been observed feeding on the bark and sap of ash trees and on rotten fruit. http://www.uky.edu/Ag/CritterFiles/casefile/insects/beetles/hercules/hercules.htm#cycle

Female beetles lay eggs in the soil when they are active during warm months. The eggs hatch and the larvae live underground from six months to one year during which time they grow, molt and pupate underground. A few weeks after pupation, the adult beetles emerge. Adults remain underground until spring. After the adults emerge, the females release a pheromone that attracts males for mating. Males use their horns as they fight to determine which will mate with the female. After mating, the females then burrow into the ground and lay eggs. http://www.uky.edu/Ag/CritterFiles/casefile/insects/beetles/hercules/hercules.htm#cycle