Beekeepers have taken advantage of these races and bred new races to produce bees with desirable traits such as gentleness or good honey production. However, since all races can mate, all races can interbreed.

Africanized honey bees were introduced into the Americas in the mid 1950’s by way of Brazil.  During this time, Brazil was looking for ways to improve their honey production and introduced honey bees from tropical Africa in an attempt to establish a more successful honey bee.  The bees quickly started to spread, reaching south Texas by 1990.

Africanized honey bees are void nesters and will nest in hollow tree holes and stumps, eves of buildings, and any other cavity.  They have been known to form nests in unused BBQ pits, trash cans, and other objects.  At times, Africanized honey bees will form nests outside of voids with comb exposed, but those will generally not sustain through cold months.

Just like any honey bee race, Africanized honey bees are pollen and nectar feeders and excellent pollinators.  They feed on both nectar and pollen from flowering plants.

Africanized honey bees have a complete lifecycle: egg, larvae, pupae and adult.  A colony contains a single queen who lays all the eggs in hexagonal cells.  Eggs hatch after about 3 days into grub like, white larvae who are fed by workers.  After feeding for about 6 days, the larvae elongate and turn into prepupa and are capped inside the cell within about 24 hours.  After approximately 10 days, the adult bee will chew it’s way out of the cell.  Adult bees may take 19-23 days to develop, depending if they are queens (~19 days), workers (~21 days) or drones (~23 days).

Workers have a variety of jobs depending on age.  From young to older, these include nurse bees, construction workers, guard bees, and foragers.  Workers live as adults 5-6 weeks during warm months and up to 3-4 months during the winter months.

Queens can live up to five years, but most are likely replaced within two years.  Drones live approximately 3 months, but various factors reduce that lifespan, including mating and being killed off prior to winter months by workers to prevent them from eating all the food stores. 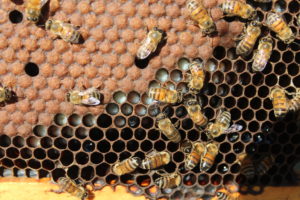 The main, undesired characteristic of Africanized honey bees is their tendency to be extremely aggressive and temperamental.  All social insects are at their most aggressive when they are protecting their home, so when the bees perceive a threat to their home they can attack humans or other animals.  Hives that are nesting in eves of structures or where humans are active, should be removed and relocated or killed.  A certified pest management professional or beekeeper should be employed for such a task.

Honey Bees In and Around Buildlings