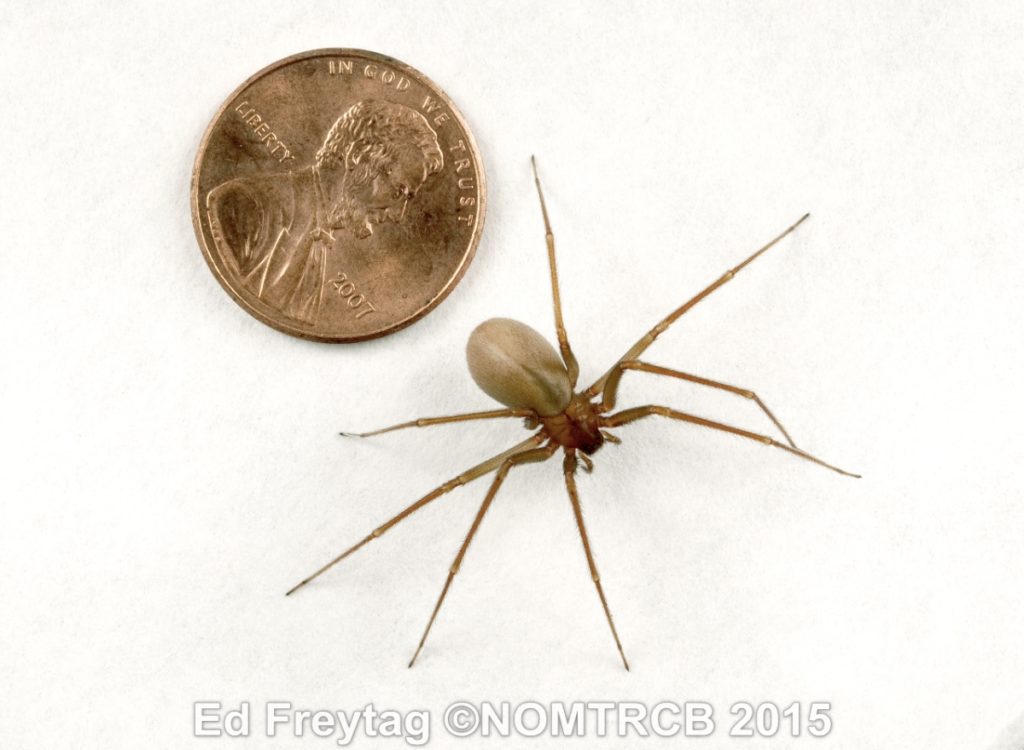 The color of the brown recluse spider varies from light brown to greyish spider, with slender legs extending over an area about the size of a quarter to a half-dollar. Two characteristics that help distinguish this spider from similar species include the dark violin-shaped marking on the back of the front portion of the body. The three pairs of eyes are arranged in a semicircle. Adult brown recluse spiders are most frequently seen during the spring months. Mating season in Oklahoma, Arkansas, and Texas, lasts from April to early July, during which time female spiders produce up to five egg sacs, containing about 50 eggs each. The length of time required for development to the adult stage is slightly less than a year, and in the laboratory, spiders have been observed to live for up to two and a half years.

The best-known of the recluse spiders inhabits many of the Southern and Midwestern states.They are often found in garages, firewood piles, cluttered cellars, and piles of stored boards. Around homes they are often found around bathrooms, bedrooms and closets, under furniture, behind baseboards and door facings, or in corners and crevices. They are most active during the night when they hunt. People are often bitten while they are asleep after rolling over one in bed. Others are bitten while putting on clothes that have been hung undisturbed near where they are hiding.

Recluse spiders, as their name implies, are generally shy. They spin nondescript white or grayish webs, where they may hide during the day. They are predators of insects and other arthropods.

Brown recluse spiders are insect predators. When large numbers of spiders are present in a building it usually means that insect prey are also abundant. Common prey for spiders may include crickets, silverfish, cockroaches, etc.

Look in debris, under objects, piles of wood, utility boxes, storage areas, dark areas, clothing, boxes, furniture, clutter and stacks of things. Indoors,they are mostly found in undisturbed storage areas, such as closets, crawl spaces, basements and attics, especially those that are cluttered. These spiders hunt at night and hide during the day. They prefer to be in locations that are not occupied by human traffic. They usually run for cover when disturbed.

Egg, spiderling (nymph) and adult.  Brown recluse spiders lay 1-2 egg masses per year in dark, sheltered areas. The egg cases are round, about 5/8 inch (1.6 cm) in diameter, flat on the bottom and convex on top. After 24 to 36 days the spider lings emerge from the egg case. Their slow development is influenced by their nutrition and environmental conditions.

Unnecessary clutter in the structure should be eliminated, spider webs should be removed from interior and exterior areas, and a thorough vacuuming should be undertaken around, under, and behind furniture. Brown recluse spiders are frequently found in and around boxes stored in closets and attics. Stored boxes should be tightly taped shut to eliminate the availability as a nesting site. Clutter removal is best done before your pest control professional arrives.

Sticky cards readily trap brown recluse spiders, and do provide some spider control. Placing sticky cards in out of the way locations, especially next to walls, in closets and under furniture, can not only remove some of the spider population, but will allow you and your pest control provider to track the effectiveness of your control efforts over time.