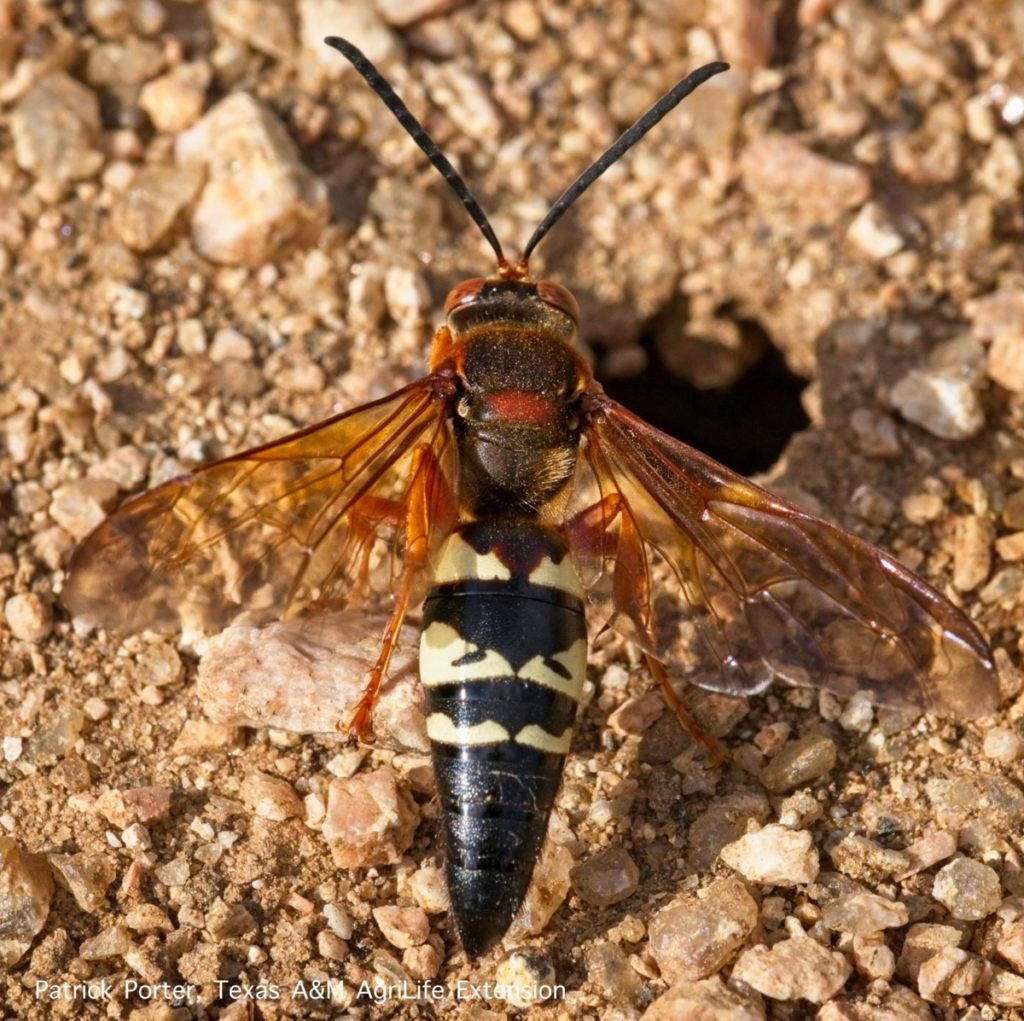 Only the name is scary; cicada killer wasps are not a threat to people, just cicadas. In Texas we have two species of cicada killers, the eastern and the western (Sphecius speciosus and Sphecius grandis, respectively). Of these the eastern cicada killer is by far the most common. The males have a pseudo-stinger (false stinger which is an extension of the abdomen) but cannot sting, and females only sting if threatened, like when picked up with a bare hand. Cicada killers do not “attack” people; the behavior sometimes perceived as being an attack is actually the male being territorial, trying to drive an intruder away from the underground nest or a nearby female. Since males cannot sting, there is really no danger. If you have a cicada killer buzzing around you, then keep walking to remove yourself from the territory. The Asian Giant Hornet is much larger than an eastern cicada killer, has a wide, orangish head, a black thorax and wings, and a black and orange smoothly striped abdomen. The eastern cicada killer has a black head that is smaller with respect to the body, a black thorax with brown wings, and a zig-zag pattern of yellow stripes on a black abdomen. If you see this yellow and black zig-zag pattern, the wasp is not an Asian giant hornet.

The eastern cicada killer is found in the U.S. from South Dakota to New Mexico, south to Florida and all along the east coast. It is also found in Ontario, Canada. The western cicada killer can be found from Texas to California and northward to Nebraska and Washington State.

Favored nesting sites are those with light-textured soils that are well drained, and that are reasonably close to trees that will have cicadas in them. Unfortunately, this sometimes means the nesting sites are adjacent to patios or walkways, or in gardens or nearby embankments. A good nesting site might be utilized by several female cicada killers.  The wasps are not social insects, like honey bees, they just share good nesting sites. Female cicada killers build nesting tunnels beneath the ground, with several branches leading off from the main tunnel. The tunnel is a “nursery” for their young. Females locate a cicada, sting it to cause paralysis, and bring it back to the tunnel. She will then drag it inside and stuff it, and perhaps one or two more, in a tunnel branch and lay an egg inside the last cicada and seals the branched tunnel. The egg will hatch in a few days, and the developing larva will consume the cicada(s) as it grows during the next two weeks. Once the larva is fully grown, it spins a silken cocoon in which it will remain until the following summer. It will then exit the cocoon, enter the pupal stage and ultimately emerge as an adult. There is one generation per year.

Because they are not a threat to people, and because they are beneficial insects, there is seldom a need to manage cicada killers. On the other hand, cicadas, while they can be annoying, can also damage trees. Cicada killer wasps specialize in killing cicadas while posing almost no risk to humans.