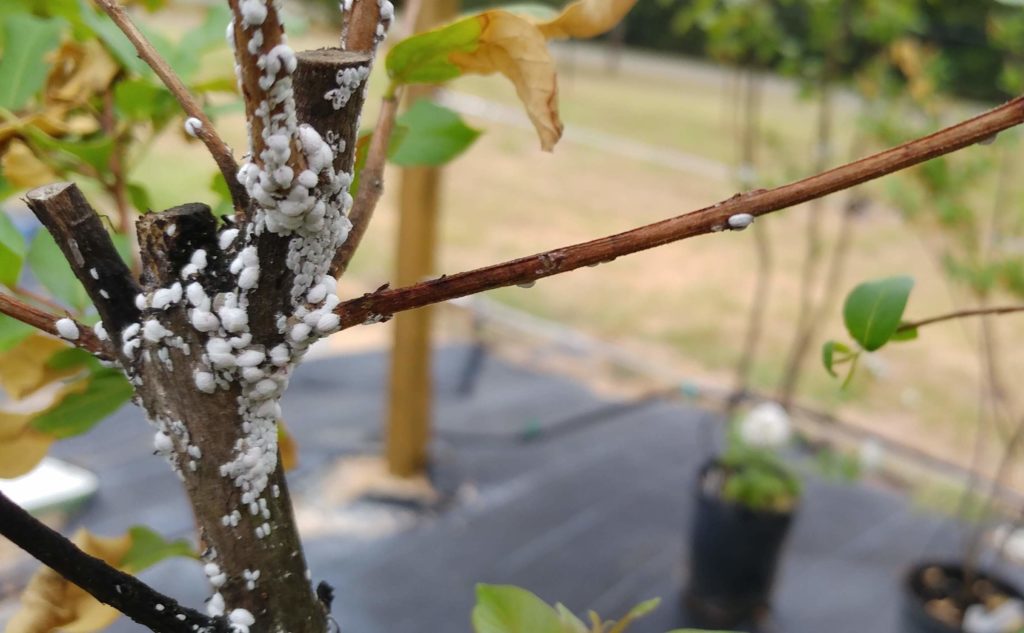 The crapemyrtle bark scale, Acanthococcus (=Eriococcus) lagerstromiae (Kuwana), was first confirmed in the USA in 2004 in the landscape near Dallas (TX), although it was likely introduced earlier. The scale is a sucking insect that feeds on the phloem (sap) of plants. As it feeds, it excretes a sugary solution known as “honeydew” (similar to aphids, whiteflies, and other sucking insects). Heavy infestations of crapemyrtle bark scale produce sufficient honeydew to coat leaves, stems and bark of the tree. This honeydew, in turn, will eventually turn black as it is colonized by a concoction of fungi, called sooty mold. Although crapemyrtles rarely die as a result of crapemyrtle bark scale infestation, the sticky leaves and black trunks greatly reduce the attractive appearance of the tree.

Immature crapemyrtle bark scale are hard to see with the naked eye, but adult scale covers and egg sacs are frequently visible on the upper branches and trunk of the tree. These scales include larger, white, oval (female) and smaller, elongate (male) scales.  Both male and female scales of the crapemyrtle bark scale are immobile, and will “bleed” pink blood when crushed. The crapemyrtle bark scale is native to Asia, and had previously been reported from China, Japan, and Korea. In its native range, it has been reported on plants from 16 different genera and 13 families, most notable persimmon and pomegranate.

Since its introduction, crapemyrtle bark scale has spread across most of the southeastern United States. Human transport on infested nursery material likely accounts for the long distance spread of the scale. Short distance spread likely occurs via wind or by hitchhiking on birds, mammals and larger flying insects.

Crapemyrtle bark scale is found almost exclusively on the bark. Within a tree, first stage crawler numbers are similar on both upper and lower branches, based on trapping on 12 trees in College Station TX throughout one season (Vafaie et al., 2015).

After hatching, the scale emerging from the egg is called a crawler. This first life stage (1st instar) is mobile and is the only stage that can disperse (via wind or animal transport). Once settled on the tree, the crawler remains in the same spot for the remainder of its immature life. Nymphs actively feed and produce honeydew. Mature female adults form a waxy protective covering (ovisac), mate with a male scale, and begin laying eggs. Females lay between 114 to 320 eggs in their lifetime (Jiang et al. 1998) and die in the egg sac. Upon completing their immature lifecycle, males pupate within the adult scale cover, and emerge as a winged adult. Effective management of crapemyrtle bark scale relies on good monitoring practices to ensure that pesticides are targeted towards vulnerable stages. Spraying contact insecticides on egg sacs or pupae may have very little efficacy. Applications should be timed to target crawlers or immature nymphs before coating themselves in the white wax. Crawler activity appears to peak between mid-April to beginning of May for several locations across Texas and Louisiana. To determine crawler activity at your location, consider using double-sided sticky tape traps around the branch of the tree. Remove and replace with a new piece of tape weekly, and check tapes for presence of crawlers (see images below). When numbers of crawlers start to increase, consider control measures below.

Several pesticides have been investigated for efficacy against crapemyrtle bark scale, with most success from the following active ingredients (Vafaie et al., 2020):

Drench applications should be made very early in the season, at the time of bud break (around March in Texas), since these drench insecticides can take about 60 days to translocate into the plant to be effective against the scale. The bark spray applications should ideally be made when crawlers are out and exposed; typically near mid-April and beginning of May. Spraying female egg sacs and male pupae may not be effective. Insecticide applications will not remove white spots or sooty mold, but prevent future scale population growth. Crapemyrtle trees shed their bark, and if crapemyrtle bark scale has been effectively managed, no new white spots or sooty mold should form after bark shedding. Please note that crapemyrtle aphids, a common pest found on crapemyrtle leaves, can also be a source of honeydew and subsequent sooty mold.