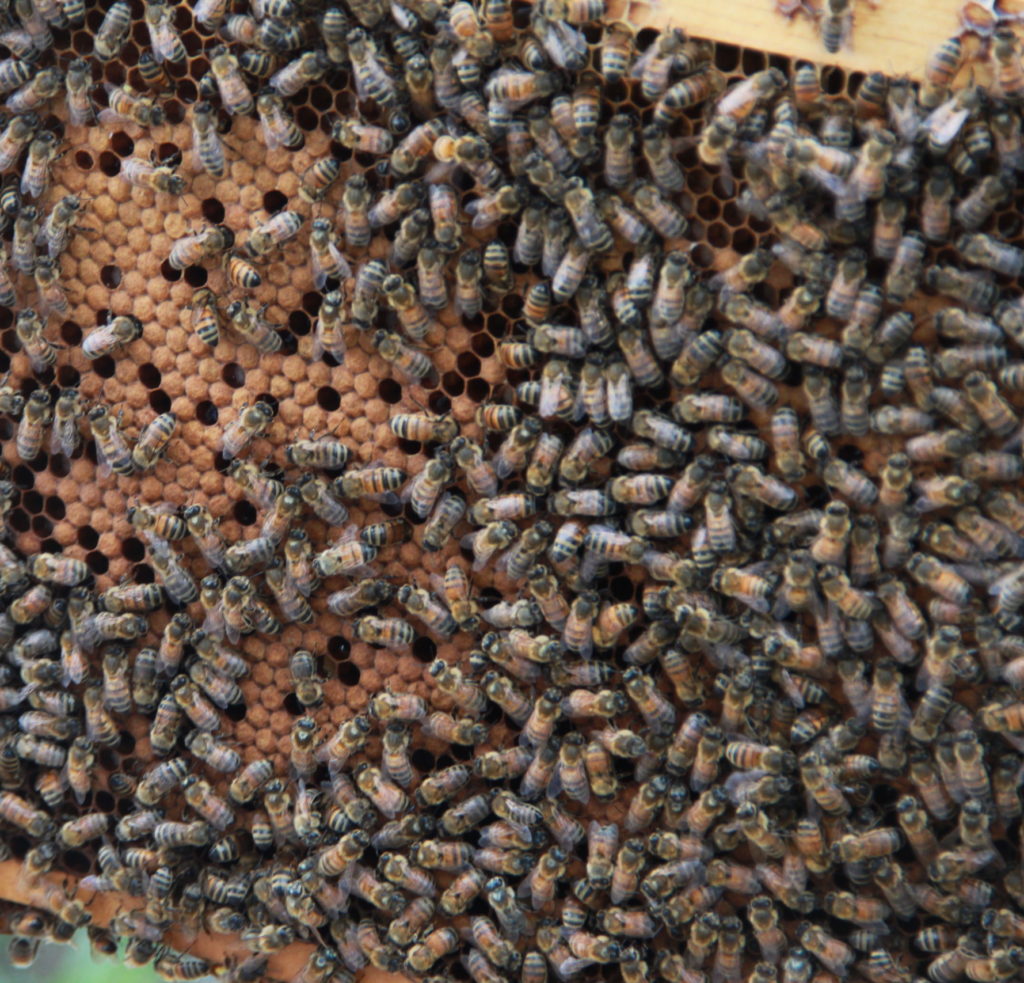 Honey bees,  Apis mellifera, are a social, beneficial insect and considered the most important pollinator to food systems.

Honey bee workers are approximately 15mm in length.  They are fuzzy bodied insects, which helps with their ability to pollinate.  They are generally yellow and brown, but color varies based on the race of the bee.  They have lapping and chewing mouthparts and feed on pollen and nectar.  Honey bees are stinging insects, but only workers are able to sting and are more prone to do so when they feel their home is threatened.

Honey bees (Apis mellifera) are not native to the Americas.  They were introduced in the 1600’s by way of European settlers.  It is believed honey bees were first introduced in 1622 in Virginia, and within decades colonies were established throughout the colonized states.

Honey bees are void nesters and nest in hollow trees and stumps, eaves of buildings, and any other cavity.  They have been known to form nests in unused BBQ pits, trash cans, and other objects.  At times, honey bees form nests outside of voids with comb exposed, but those generally will not survive through cold months.

Managed honey bees are housed in a one of three types of hives.  Langstroth hives are the most common hive used by beekeepers, but others include Top Bar and Warre or variations of those three.

Honey bees feed on pollen and nectar. They are excellent pollinators and are often found foraging on flowering plants. Honey bees have a complete lifecycle: egg, larvae, pupae and adult.  A colony contains a single queen who lays all the eggs in hexagonal cells.  Eggs hatch after about 3 days into grub-like, white larvae that are fed by workers.  After feeding for about 6 days, larvae elongate their bodies and turn into prepupa.  The prepupa are capped inside the cell within about 24 hours.  After approximately 10 days, the adult bee chews it’s way out of the cell.  Adult bees may take 19-23 days to develop, depending if they are queens (~19 days), workers (~21 days) or drones (~23 days).

Workers have a variety of jobs depending on age.  From younger to older, these include nurse bees, construction workers, guard bees, and foragers.  Workers live as adults 5-6 weeks during warm months and up to 3-4 months during the winter months.

Queens can live up to five years, but most are likely replaced within two years.  Drones live approximately 3 months, but various factors reduce that lifespan, including mating and being killed off prior to winter months by workers to prevent drones from eating all the food stores. Honey bees are considered a beneficial insect, but they can become a nuisance when they choose to nest close to human activity.  Like all social insects, honey bees can become aggressive when they perceive a threat to their home.  Hives that are nesting in eaves of structures or where humans are active, should be removed and relocated or killed.  A certified pest management professional or beekeeper should be employed for such a task.

Honey Bees In and Around Buildings