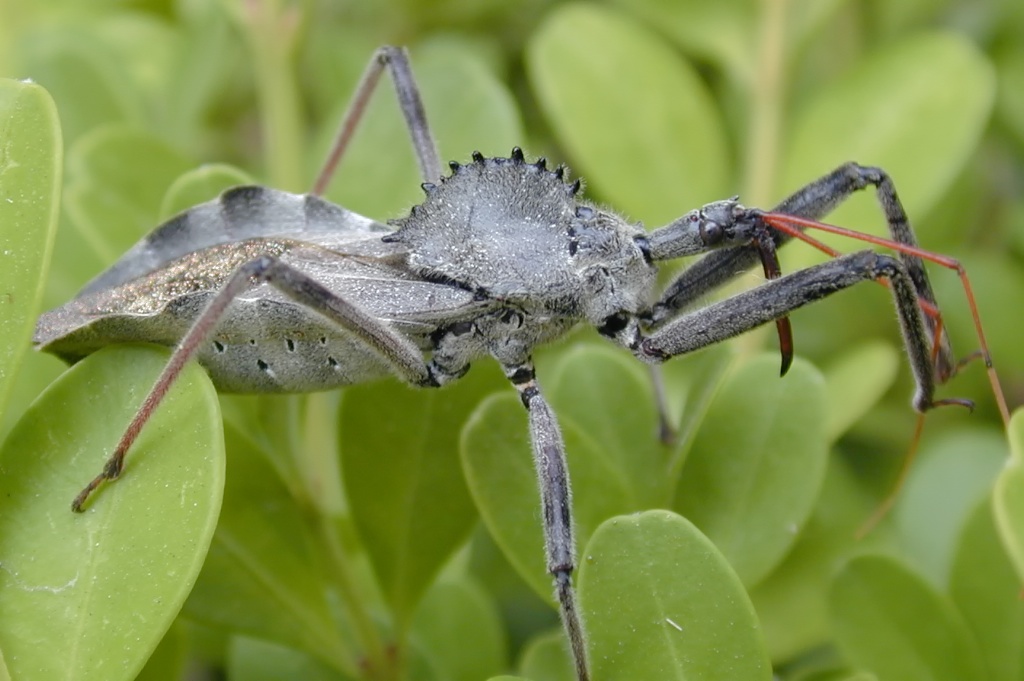 Wheel bugs, Arilus cristatus L., may appear frightening to some individuals. However, these are beneficial insects that prey on other arthropods such as caterpillars, moths, and other soft-bodied insects. Wheel bugs occur throughout the state of Texas.

Adults have a gray body, black oval on the wings, and a reddish-brown pair of antennae. The most notable characteristic is the large gear-like projection found on the middle section (thorax) of the insect. In addition to the previously mentioned characteristics, the front legs of all wheel bug stages are modified for grabbing and holding prey. Adults may fly on occasion, but they are often found moving across vegetation or on the sides of buildings.

Wheel bug eggs are brown and cylindrical, often laid in large clusters. Immature wheel bugs (nymphs) are initially red and black before transitioning to a red and gray color pattern and, finally, a gray and black color pattern. Though older nymphs will have visible wing pads, they are not able to fly like the adult life stage. Wheel bugs are native to North America, occurring from the Northeast to the Southwest regions of the United States.

All life stages are predatory and feed on other arthropods such as caterpillars, moths, and other soft-bodied insects. Wheel bugs use their enlarged forelegs to grasp prey. Upon capture of their prey, the wheel bug holds its prey in place while it pierces the prey and ingest the body fluid with its stout beak.

As is the case with all insects that belong to the order Hemiptera, wheel bugs follow an incomplete life cycle: eggs, nymphs, and adults. There are five nymph stages for this insect.

The wheel bug lays its cylindrical, brown eggs in groups. Eggs overwinter and hatch in the spring and continue developing until reaching the adult stage in summer or fall.  Small, red and black wheel bugs emerge from eggs and disperse into the local environment. Some of these nymphs will succumb to predation or cannibalism. As the nymphs develop, the wheel bugs will transition to a red and gray color pattern and eventually a gray and black color pattern.

Adults, unlike nymphs, are capable of flight with their fully developed wings. The adult stage can be found in late summer and fall. On average, wheel bugs take approximately three months to progress from nymphs that have just emerged from eggs to adults.

Wheel bugs are beneficial insects due to their predatory nature and are not known to transmit any disease. However, handling of wheel bugs may result in painful insect bites. As such, management of wheel bugs is not recommended.