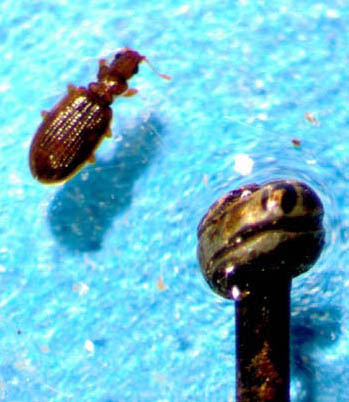 Fig. 1. Plaster beetle next to the head of an insect pin.

The occurrence of many very tiny beetles in newly constructed or renovated homes and other structures could be a sign of mold buildup that has been used as a breeding habitat by species in this group of beetles. The plaster beetle, Cartodere constricta (Gryllenhal) is one of a number of minute brown scavenger beetle species in the family Latridiidae (Coleoptera)(Kingsolver and Andrews 1991). These beetles are cosmopolitan, occurring throughout the world, and are primarily found in structures.

These beetles feed on mold (mycophagous). Frequently, they can be found in newly constructed or recently renovated buildings where plaster was not dried sufficiently and became moldy, attracting the beetles and providing food for the developmental stages.

Fully developed adult beetles leave the breeding area, often in high numbers, and congregate around lights and in window sills where they can become a nuisance. Occasionally, these beetles contaminate stored food, feeding on mold rather than directly on the product. Other areas providing mold or mildew that may be colonized by these beetles include air conditioning vents, siding and other areas where moisture buildup can occur due to condensation, water leaks or plumbing.

Management of these, as well as other indoor pests associated with mold and mildew habitats such as booklice (see Booklice publication, EEE-00043), should begin with a thorough inspection of the premises to identify potential breeding areas. Eliminating conditions conducive to mold and mildew growth, such as fixing leaks or plumbing problems, air conditioning condensation, and properly allowing plaster to dry during construction will reduce suitable habitats for these insects to develop. Contact insecticide sprays to kill adults leaving breeding areas address only the symptoms of the problem posed by these beetles – high moisture creating growing conditions for mold that the beetles use as a food source.

The author wishes to thank Ed Riley, Associate Curator of the Texas A&M University insect museum for his identification of this species as providing background information and literature for the preparation of this fact sheet. Specimens submitted for identification, both collected May 17, 2010, were collected by J. Rico in Galveston Co. and Wizzie Brown, Extension Program Specialist in Travis Co., TX. Also appreciated are reviews of the manuscript by W. Brown and  Chris Sansone.