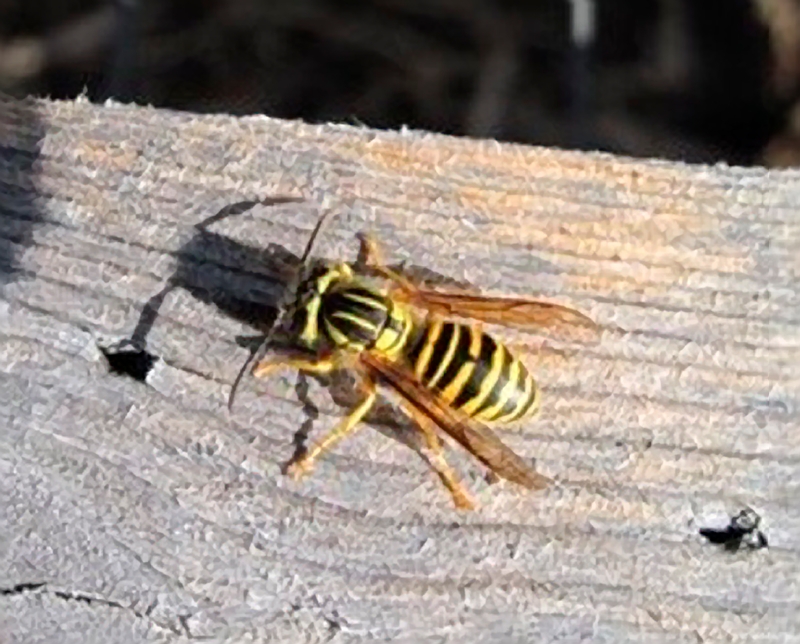 Southern yellowjacket workers are about 1/2” long, yellow and black striped insects. Their wings fold in on themselves so that they look long and thin when the insect is not flying. Queens are larger, and often they are a more solid yellow-orange with the black stripes being much reduced. The southern yellowjacket is found in Texas and eastward in the country and south to Central America.

Yellowjackets use their chewing mouthparts to chew plant fiber to form “paper” for their nests. Nests are most often found below ground, but can be in tree holes and wall voids or similar places above ground.  Yellowjackets are protein feeders and eat other insects, but they can also eat flesh from dead animals. They also feed on plant nectar and frequently forage around garbage cans and picnic tables. Mated queens overwinter as adults in protected areas and start new colonies in the spring. Initially, the queen constructs the first cells of the nest, lays fertilized eggs, and provides food for this early generation of larvae. It takes about 30 days for these insects to develop and they then assume the duties of nest building and food gathering. The queen “retires” to egg laying and no longer has to leave the nest. Colonies grow throughout the summer and can reach a size of 4,000 insects. New queens are produced in the nest in autumn. At this time, males are also produced by the queen depositing an unfertilized egg. The new queens emerge from the colony, mate, and then find a protected place to overwinter. The old queen then dies and the colony declines. However, in Texas, some colonies can survive several years.

Southern yellowjackets foraging for food can be a nuisance but pose no significant threat. However, when nests are disturbed there is a significant risk of stinging, and each yellowjacket can sting multiple times. Be aware of yellowjackets and track the foragers back to the nest. Before attempting to treat a nest with insecticides, put on thick clothing and cover your face and hands. Making the treatment at night will make it harder for the insects to find you, and making treatment when it is cold is better because the insects cannot respond as quickly when they are cold.

If an insecticide is to be used, then synthetic pyrethroids are a good choice. They have quick knockdown, but they also irritate the insects, which may heighten their defensive response. All of the aerosol “wasp and hornet” sprays sold in stores are based on synthetic pyrethroids. Be sure to choose one that sprays a stream of insecticide a long way. Small colonies can probably be killed with one can of insecticide, but larger colonies may require more.  Some people might be tempted to save a little money and buy a concentrated lawn and garden pyrethroid to mix in a hand pump sprayer. The active ingredient may be the same as what is in a can of wasp and hornet spray, but realize that that can of spray has synergists not found in the concentrated insecticides meant for pump up sprayers. These synergist make the pyrethroid work much more quickly (for knockdown) and usually increase the kill rate. Taking out a yellowjacket nest is not a good place to economize.

Yellowjacket lures are available at home and garden stores and can be used to trap foragers. However, they will not eliminate established colonies.